“HOLOGRAM” (noun): an image that is projected in a way that makes it appear three-dimensional.
“AUGMENTED REALITY” (noun): superimposed computer-generated images on a user’s view of the real world. Aka “MIXED REALITY”
“HOLOLENS” (noun): the first fully untethered, holographic computer, enabling you to interact with high-definition holograms seamlessly blended with your world. 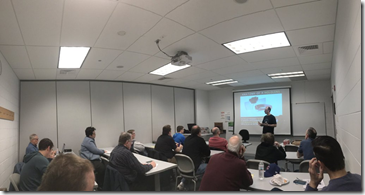 Are you ready to dive into Augmented Reality? Ready to see how we can build our own Holographic world overlay where we walk with Dinosaurs and float among the stars?

Ready to see not only how we interact with holograms but how those holograms react to us? Me to…

This will be a from scratch, step-by-step, lots of coding experience! Using the latest Visual Studio, Unity and C#. 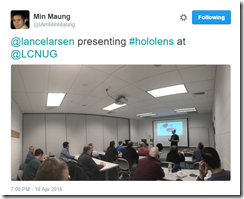 Join Lance Larsen (www.lancelarsen.com) fresh back from the Microsoft //BUILD conference — where HoloLens was center stage!  Lance is avid community speaker -and- president of the Madison .NET developer community (www.MADdotNET.com).

Lance speaks passionately on the dawn of a technology that could fundamentally change how we live and interact with wearable computers that enhance our perceptions of the real world! Join him in the revolution of reality!

Lance is the owner of HoloSoft (www.HoloSoft.net) and consults with companies to build the future with the latest .NET technologies — if you have a AR / VR project you or your company needs assistance with, let him know. 🙂

Lance is also one of the original organizers for That Conference (www.ThatConference.com) – August 8th – 10th, 2016 – the original Summer Camp for Geeks in the Wisconsin Dells!

Hololens 2 Available for US!